we had signs to carry

songs to learn (thank you jen and abby!)

what a blur of memories we all hold

yes!  this wasn’t in my lesson plans, but it made a way for dr. king to enter into our dramatic play a bit more.

we spend a lot of time looking in mirrors during our M is for Martin week.

we made collage faces again this year starting with group painting a paper covered table.

we stepped over to another table to make hand prints (and sneak a moment with the book).

yes!  lots of brown paper:  just what we need to make our collage faces the next time we come:

the first printable we use for cutting practice, then gluing into a capital M shape, or on to random art projects. we also used these images to add dr. king’s face to some of our people shaped blocks.

this is the one we used last year with watercolor paints while listening to jack johnson, of course.

this last printable is from years ago by now…we offer lots of shades of brown crayons, mirrors and photos of dr. king.

we ended the week with watercolor painting.

i had some of these little people sticks that seemed good for this week.

(tip:  when we use these kind of watercolors, i have some that are kept “clean” and some that are mixed.  some children simply are not ready to rinse each time.  we talk about “dancing the brush on the bottom of the cup” in between colors.  then a quick rinse under the tap has them all clean again.)

how honored i am to have 68 little hands in my life each week.

people with darker skin and people with lighter skin could not go to the same school (or restaurant, park, etc). even in a room full of white kids with a white teacher, i DON’T say “they couldn’t come to our school.”

there was a man who was so angry with what dr. king was saying that he shot him with a gun.  dr. king was hurt badly enough that he died. (this only strengthens our conversations on the realities of guns)

we used to just listen to excerpts from dr. king’s 1963 “i have a dream speech” that i bought via itunes.  but this year we’re back at the church with wireless internet, so i found the speech on youtube.

there were wonderful images of the crowds as well as dr.king.  i did hear some kids say they were looking for the man with the gun until i explained that dr. king wasn’t killed during this speech.

since we don’t have movie or computer time at preschool, this was especially exciting.  some children stayed for the duration of the speech and when it was over, one said:  “we’re ready for another movie!”

we ended the days with a dance party (thanks for the music, annie).  mc hammer made it perfect.

oh, dr. king, i think your soul would be settled a bit by the hearts of these young ones.

we’ve had a meaningful couple of days already this week.

i got misty eyed once when we watched a mlk video on youtube…just seeing 12 little faces all gaping mouthed and wide eyed listening to voice of a man.

one of the preschoolers said, “he sounds angry.”  then we went back to our book and recalled that there were times when he WAS angry!   “yeah!  i would be too!  yeah, they were so mean.  yeah, it wasn’t fair.  yeah, if they did that now they’d be in jail.”

good stuff, i tell you.

we’re coming up with laws that we think dr. king would be glad we have.

after our march, we had hot warm chocolate in honor of dr. king’s birthday.  we really needed to warm up ourselves.

a sweet ending to the day.

in honor of what would have been dr. king’s 84th birthday, i share these thoughts with you.  these were collected during loud and chaotic brainstorming sessions with 25 preschoolers. during these sessions, some kids are on their bellies with me around the paper on the rug while others continue work time.  we’ll call out their names and listen really carefully to see if they have ideas to share. i really love those experiences. 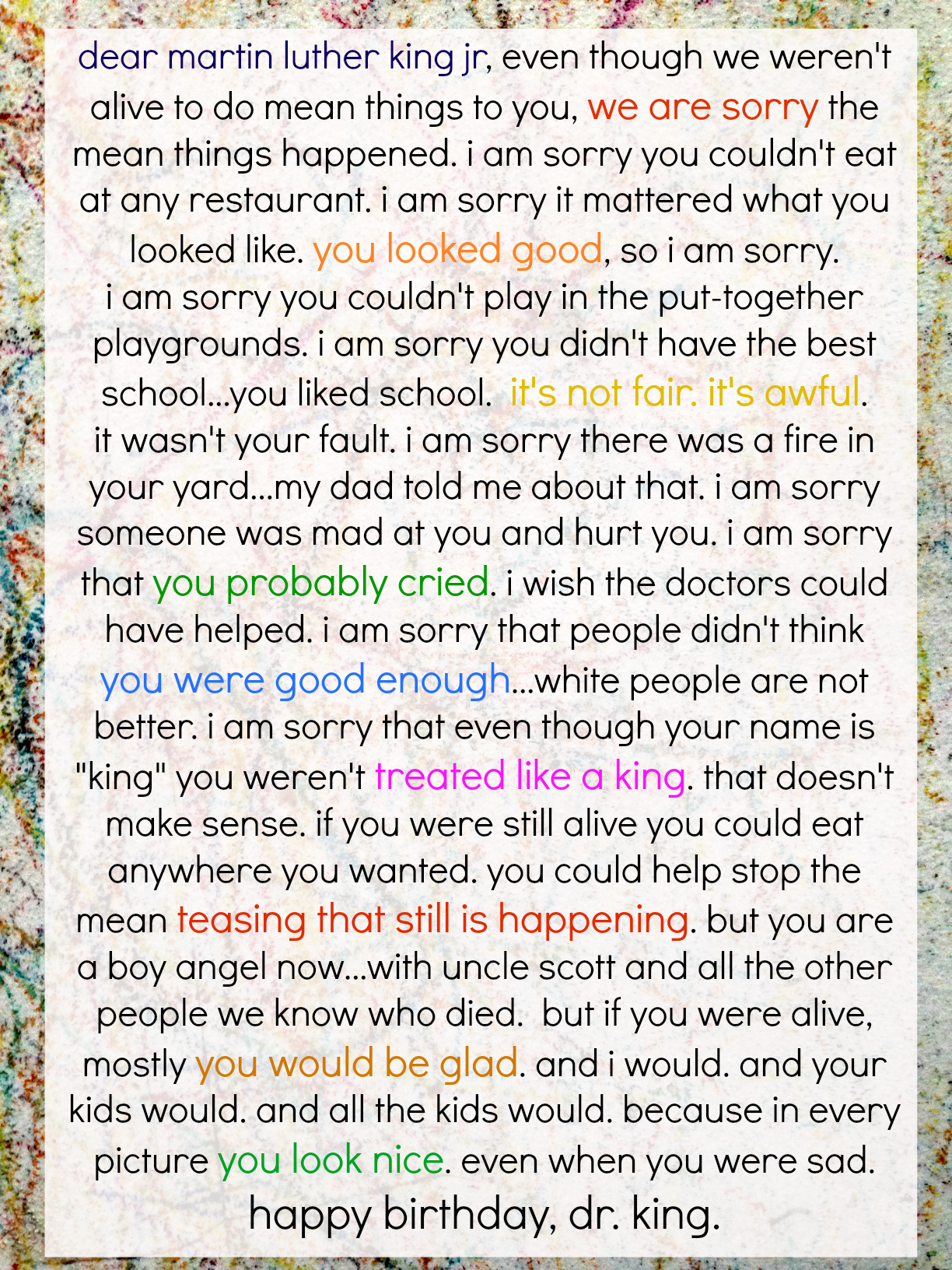 the tender conversations around racism and the injustices that still exist give me hope. not included in the letter, but said at the end of the day by one friend:  if i ever hear people making fun of someone because of their skin, i know what to do now.

may we all be so brave.